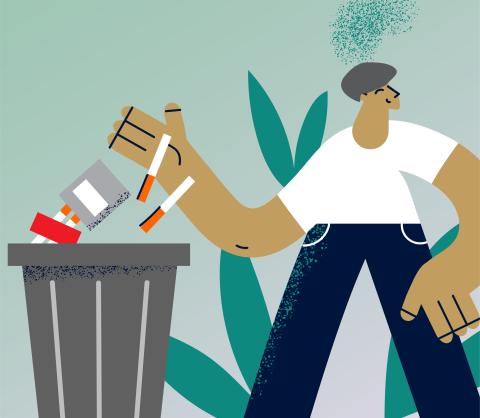 A Pack of Reasons to Stop Smoking

Cigarette packages today carry warnings about the health damage caused by smoking, such as cancer, lung and heart disease. But no package is large enough to cover all the negative effects. Recent studies link smoking to:

Indeed, the Centers for Disease Control and Prevention (CDC) says that smoking harms not only the lungs, but nearly every organ in the body—the heart, the brain, the joints and the immune system. Smoking is bad for oral health. It causes erectile dysfunction in men. And smoking is responsible for almost 500,000 deaths each year in the U.S.

If quitting for your own good isn’t reason enough, consider that almost 10% of smoking-related deaths are due to secondhand smoke, when a person isn’t a smoker, but is regularly exposed to tobacco smoke. These people could be your friends, your family, your grandchildren—or, they might not even be people! The American Veterinary Society says secondhand smoke can harm does, cats, birds and even fish.

Even though the rate of smoking has declined steadily over the last few decades, it is still a factor in today’s rising healthcare costs. In 2021, the CDC reported that expenses directly connected to death and disease caused by smoking costs the U.S. economy more than $300 billion each year. Medicare estimates that 10% of its budget goes toward treating smoking-related illness.

Even on the personal level, smoking is very expensive. On average, a person who smokes a pack of cigarettes a day would save more than $2,500 each year if they quit.

If an older adult has smoked throughout life, does it do any good to quit now?

Studies show that it does. Medicare covers smoking cessation coverage for beneficiaries, pointing to research showing that seniors benefit from quitting, even after 30 or more years of smoking:

At present, seniors are less likely than young people to enter a smoking cessation program. But take that step. Ask your health care provider about quit smoking resources, which might include classes, support groups and in some cases medications. And if you aren’t successful the first time, try again. Statistics show that of all the age groups, older adults who take part in a smoking cessation program are the most successful at kicking the habit.

Source: IlluminAge AgeWise
Back to Blog